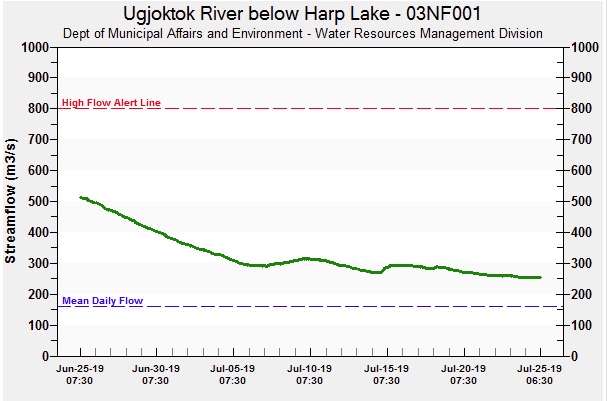 Our expedition team met last night with Richard Alexander to go over the map, see some pictures, and get some beta (information) from him. We then (almost) finalized our group gear list with who is bringing what. The excitement is building as are the butterflies (they always seem to show up about this time before an expedition). This is the time where final gear, clothing, tech, and boat decisions are made. The picture above shows current flow rates below Harp Lake, where we will begin the trip. You’ll notice that the monitoring station names the river as the Ugjoktok. As mentioned in my previous post, the river we are paddling has two different names with a few different spellings depending on who you ask, the age of the map, and when people have travelled the river in the past. It’s been very interesting to explore the practices of geographical naming and which names are on the map as we prepare for our expedition.

Jamie Jackman was kind enough to answer my query about the river’s names. This is what he replied:

“Ujutok is the main river and empties into a Ujutok Bay just south of Adlatok Bay. Adlatok River flows out of the Ujutok River. This is all according to my father. However, I’ve heard the main river referred to as Adlatok right from the height of land and that it empties into Ujutok and Adlatok…the Adlatok branch of the river being referred to as the Adlatok River. This is not surprising however as maps around here are not always accurate in regards to place names – more work needs to be done on this before the real place names are lost forever, in my opinion.

Adlatok is an anglicised version of the word “Allatok” or “Allatuk” or “Allaktuk” – I’ve seen it written each way – which, from my understanding, translates roughly to “place of the Innu” or “where there are Innu.” Allak being the Inuit word for “Innu.” The Innu would travel along this river from inland and come out at Adlatok Bay on their way to trade furs. The Bay was frequently visited by Innu travellers who would stop to visit the Inuit-settlers who lived there later on, my grandparents.

As for Ujutok, according to my cousin Brian, derives from the Inuit word for seal: ujuk – so Ujutok or “Ujuktuk” means roughly “where there are seal.” 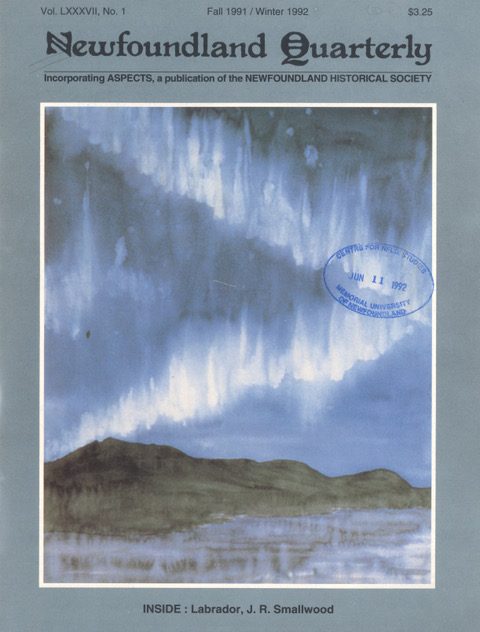 I have been searching the MUN Library and Digital Archives and found the above edition of the Newfoundland Quarterly from Fall 1991/Winter 1992. The cover features a watercolour of the Northern lights above the Adlatok River. The artist is not named in the edition but captures the beauty of both the sky, land, and water so well. I also recently learned that the late President George H.W. Bush had fished the Adlatok River and that folks from all over the world, come to fish there. The largest salmon ever caught in this province was landed on the River of Two Names (though likely one of the two branches since there are high falls that might block the salmon’s progress upstream). In a 1994 Toronto Star article, that said that President Bush had fallen in love with Labrador as was quoted as saying, “I left about a year ago, almost to this day, and for the in- between 365 days we’ve been thinking of nothing except coming back up here to the Adlatok,” he said.” I know from past expeditions in Labrador, that I will likely feel the same. Each trip there occupies a portion of my heart and soul and I often look at the Labrador pictures that adorn our walls at home and wish to be there again.

Marian and I depart St. John’s for Goose Bay on August 14. Mark, Darren, Marian and I fly into Harp Lake on August 15. Stay tuned as preparations continue and please do follow along while we paddle this most amazing river.

1 Response to The River with Two Names: Three Weeks & Counting