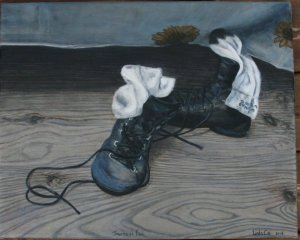 I’m up early on a Sunday morning and thought I’d start the day by writing my weekly update. The biggest news of the week is that I sent off the deposit to join the 2010 Peak Freaks Everest Expedition. I’d watched the 2010 season and knew I was ready to commit to climbing Everest once again. The Peak Freaks team was rapidly filling and it was time to jump off the diving board once again. This time I was pretty sure there was a big pool of water to land in (or at least lots of welcoming arms to catch me) and I left into the void of tackling another big dream.

I’ve set up a Facebook group for the 2010 climb and will continue to send out a weekly email so folks can come along on the entire journey. For me, the preparations and training are as much a part of the climb as the time on the mountain. When I wrote a manuscript about climbing Denali, I called it, “A Year on Denali.” Now as I approach Everest once more, I can see that it will truly be “A Year on Everest.” To join the group: http://www.facebook.com/photo_search.php?oid=102972039777&view=user -/group.php?gid=102972039777&ref=nf

I was having fun last night assigning fun officer roles in the Facebook group to folks who did and will likely play significant roles in the lead up to Everest 2. One of the folks is Linda Cox. I named her as the “Official Expedition Painter.” After my first attempt, she heard me speak. She was learning to paint at the time (her own Everest) and she wanted to help retire my Everest debt and raise funds for a second). She was struck by one of the images in my talk and asked if she could paint it. She did a beautiful job and the painting was unveiled a little over a year ago at my book launch.

The painting now hangs in my “mountain gallery” right below a sweeping view of Everest and surrounding peaks. I look at the painting several times per day and immerse myself in the waves of feelings that are evoked from that time. We called the painting, “Journey’s End” as it showed my boots plunked beside my bed in the departure/arrival village of Lukla. Now as I embark on my return to the mountain, the image is both one of departure but also one of beginning. My boots and socks are ready to be put on once again. The famous quote from Lao Tzu, “A journey of a thousand miles begins with a single step,” guides me frequently.

Especially if I am overwhelmed, which these days, is an easy thing to be. I had the privilege of listening to two eminent speakers this week, David Suzuki and Bill Clinton. Though worlds apart in many ways, they both wove messages about needing to come together as a world community to both work for social justice and the environment. Both addressed the desperate need to combat climate change and the narrowing time line for doing so. It would have been easy to leave both talks down, depressed and overwhelmed at the task of saving the planet. Instead, I left feeling committed to taking the next step, a small step, any step. Turning off a light. Rinsing out a disgusting plastic jar rather than simply tossing it. Joining a local organic veggie co-op.

In my presentations, I often say, “If I look at the entire mountain, I am instantly overwhelmed and want to quit. The task looks too big.” When I was in Africa climbing Kilimanjaro, they asked me, “TA, how do you eat an elephant?” I replied, “Well I am mostly a vegetarian.” They said, “If you were going to eat an elephant?” I shrugged my shoulders. They sighed, “Bite by bite.”

Sometime when I am climbing at altitude, it’s all I can do to bargain with myself for ten more steps. Then I make seven and pull up to catch my breath. Then I ask for seven steps. Maybe the rock that’s five feet away. I make that and commit to the bamboo wand that is just ahead. Step by step. Sometimes I can only know where the very next step is coming from. And sometimes I don’t. I just have to will it to happen.

So that is how I will take on Everest 2010. Bite by bite. Step by step. I’m going to try to have more fun this time around. Laugh more. Make better connections on my team. Rest more. Talk less. I am lacing up those boots once again and stepping out on a trail that will lead me to more adventures than I can imagine. It’s really how we make anything happen, isn’t it?

Thanks for coming along once again.

In the meantime, training for Elbrus is going pretty well. Got a few hikes and swims and strength training sessions in amid a busy week. It’s been lovely to have a weekend at home with rain to inspire me to declutter my house (and my mind).
TA

This entry was posted in Elbrus and tagged Elbrus Climb for my Dad, Peak Freaks, prostate cancer, Seven Summits. Bookmark the permalink.