It’s hard to believe that two weeks have already passed from the day my team and I stood atop Greenland’s and the Arctic’s Highest Peak. “Real life” tends to welcome you home with a vengeance and all those tasks thoughtfully put aside for the duration of the expedition suddenly start squawking for attention with the persistence of a spring hatchling. So it’s good to pause, think back, and enjoy the memories of climbing that day.

We’d actually spent much of the night at advanced base camp wondering if the mountain and the weather would grant us passage. After two weeks of high pressure, blue sky and moderate winds, the sun dogs indicated a change. The sun grew overcast through the day and visibility dropped, where once we could see the entire route that we’d skied from the Hann Glacier, now we could barely see the near peaks. The sun seemed to try valiantly to sun through and on occasion found an opening to send warming rays through to our tents and to stoke the hope in our hearts.

“Could we really have skied 26 days to this point to have weather shut us down?” We asked ourselves over and over again.

“Of course”, the wind and clouds answered.

Each time I peed that night, a frequent occurrence when I am acclimatizing to a new altitude, I zipped open the back vestibule to see if I could see the summit. Sometimes yes, sometimes no. Finally when the next morning came, I unzipped one more time exclaiming to Paul, “I can see the summit through a break in the clouds.”

He replied, “Let’s go climb it then!” He quickly added the caveat, “We’ll monitor the weather during all of our preparations to see what the trend is, hopefully it will get better as we go.

We started melting snow into water as we had every other morning of the last month, packed our summit packs, and enjoyed a feed of “Mango Hot Start.” At the beginning of the expedition both Paul and I avoided it like a dread disease but at some point, we began to eat it as a sort of “wind totem.” A term from sea kayaking where the group erects a sculpture to try to get the wind to drop to allow paddling to happen. Us, on the other hand, took it to mean a great personal sacrifice (i.e. eating icky breakfast) in exchange for good mountain weather. We done it on a few occasions on the expedition, it hadn’t let us down yet, and I found that by adding hot chocolate into the mix, Mango Hot Start was much more manageable.

Finally, with water bottles and packs full, we set out. It was the first time on the trip to ski without the burden of a pulk. With the excitement of beginning, Paul set aside his normal “easing into the day” pace and seemed to me to be zooming up the slope. Finding myself breathless and sweating for the first time on the trip, I finally called uncle and asked Paul to ease the pace. I didn’t want my climb to be over before it started. It’s always a tough thing to do to ask the team to go slower but I knew it made sense. We had a decent day in front of us and I knew if we went out too quick, it might cost us later. It was the toughest hour of the entire expedition for me.

As we had the rest of the expedition, we moved up in 60 minutes intervals. By the first rest, I had begun to find my rhythm, thank god and by the second, I was feeling a growing strength in myself. It will be a moment I draw on in future climbs when the going gets tough. After a hugely rough start where I thought I’d never make it, I was able to switch my mind and energy to a different channel and that was huge relief and made the day infinitely more fun. 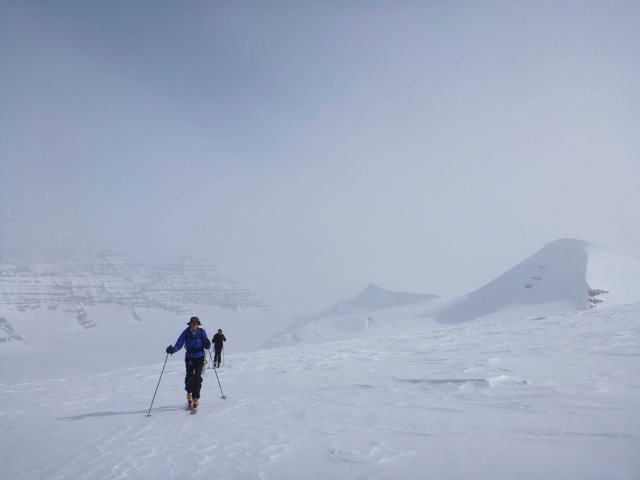 There is such joy in finding a pace/rhythm on a mountain where breath and step are linked. It makes moving at high altitude possible and is a skill to be practiced over and over again. I had forgotten to prime my mind for the additional physiologic challenge of climbing in a polar region where reduced air pressure makes an altitude feel higher than its numeric value. I experienced this before on both Denali and Vinson. 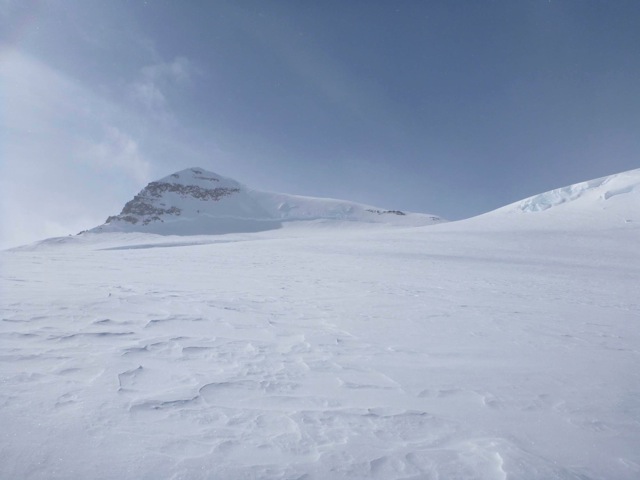 After four hours or so, we reached the bottom of summit ridge and exchanged our skis and poles for crampons and ice axe. We roped up and I took my favourite spot at the back of the rope team. We were literally tied together in pursuit of our goal. Paul led the ridge in excellent form keeping the team moving over the more challenging ground with skill and just the right amount of encouragement. The terrain dropped steeply to either side and an uncaught misstep could have had dire consequences but the team moved deliberately taking care with each step. Nearing the summit, Paul brought each member in close and we took the last steps to the summit together, sharing that moment of exuberance and satisfaction. 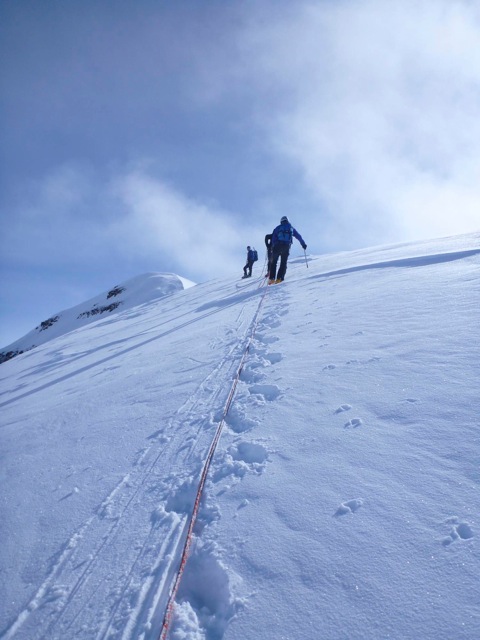 A round of handshakes and high fives led to summit photos. I was trying to call off a message from the summit via sat phone but it was highly uncooperative and I missed truly drinking in the view from the summit because I was working so hard to troubleshoot the phone connection. On the last go, it finally connected and I could share the thrill of standing atop the Arctic (listen to that call here). Paul was worried about the snow conditions on the ridge as well as the weather, so we didn’t spend much time on top-maybe 15 minutes total. We got set to descend and I led the team down the ridge. I took each step with care trying to find a pace that had each team member moving slowly but efficiently down.

Back at the skis, we took a longer break for food and water and to prepare our tired legs for the ski descent. Patrik showed his downhill prowess (and the wonders of his alpine touring gear) while I, on my nordic gear missed my ski edges that were covered by my full skins. We slowly made our way down and almost 9 hours after we began, the team skied safely back into high camp. I got the stove lit so Paul and I could celebrate with our traditional end of day soup and Pringles. It was a fairy tale ending to a fabulous expedition that we summitted but it was even more of a miracle that we still had Pringles after 27 days in the field. During the whole evening, Paul and I kept looking at each other with mischievous grins saying with more than a hint of disbelief, “We did it, we did it.” (listen to the call from back at advanced base camp)

For it was never at all certain that we would summit. Never at all certain we would even reach the mountain. Indeed, it required us to move 12 days straight, it required good weather, and it required that we find a route that traversed five mountain passes just to reach the base of the mountain. So it was with sweet delight and appreciation of all things that needed to come together, coming together that we kept repeating for much of the next 48 hours, “We did it, we did it.” (hear the joy in my voice calling in from Iceland on our first evening out)

This entry was posted in Everest 3.0, Gunnbjørn Fjeld and tagged 2012, Go for Greenland, School Curriculum. Bookmark the permalink.