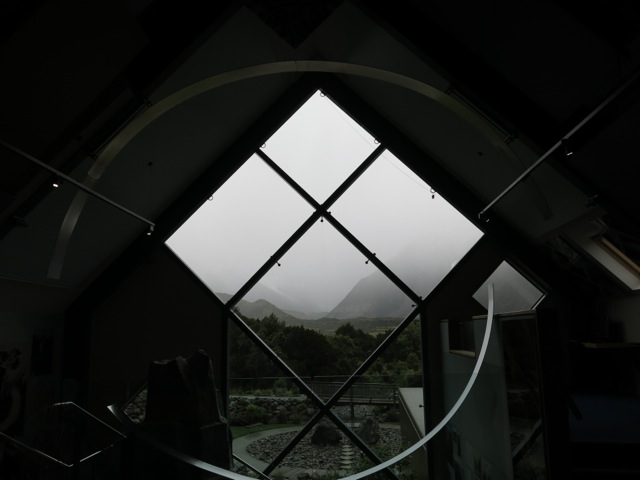 My first view of Aoraki/Mount Cook…This is the view from the National Park Headquarters in the midst of a storm that eventually dropped 40 cm of snow on the mountain.

Because we couldn’t fly out to the mountain, we stopped in at the National Park Headquarters and I enjoyed learning the history of the mountain including the stories of the many women who’ve climbed it. The first woman to reach the summit of Aoraki/Mount Cook was Australian Freda Du Faur in 1910. Betsy Blunden was the first woman to professionally guide the mountain starting in 1928 (she was first woman in the world to work as a professional alpine guide). The first team of all women to climb Aoraki/Mount Cook was in 1953 (demonstrating the increasing skills and independence of women climbers). The team members were Mavis Davidson, Doreen Pickens, and Sheila MacMurray.

Look who else was featured on the displays of the National Park…the one, the only, and my guide, Lydia Bradey. Lydia was the first woman to climb Everest without the use of supplemental oxygen and I believe, remains the only New Zealander to do so to date. 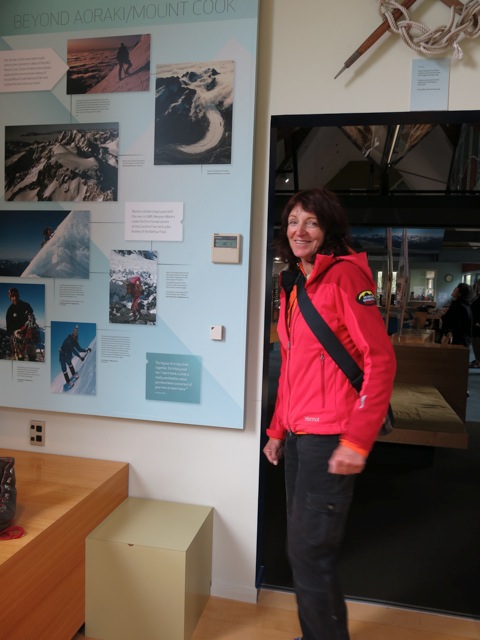 Lydia is very humble about her accomplishments. Here she was kind of enough to post with her picture. You can see she is humouring me!

Our first glance of Aoraki/Mount Cook from our helicopter flight in. This picture gives a good look at the Linda Glacier and the Plateau Hut is on the ridge line that is near the right side of the photo at the midline.

Our first view of Plateau Hut…this “flying in thing” could spoil a girl…though I often think the walk in is a critical part of mountain conditioning. Looking at the terrain, it would be quite the climb just to get to the hut! 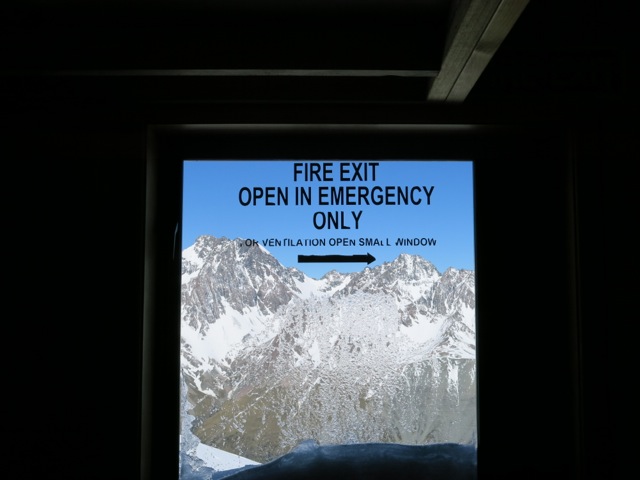 I loved that the windows in the hut were also emergency exits and further got a kick out of thinking of nature as a cure for all sorts of personal emergencies. 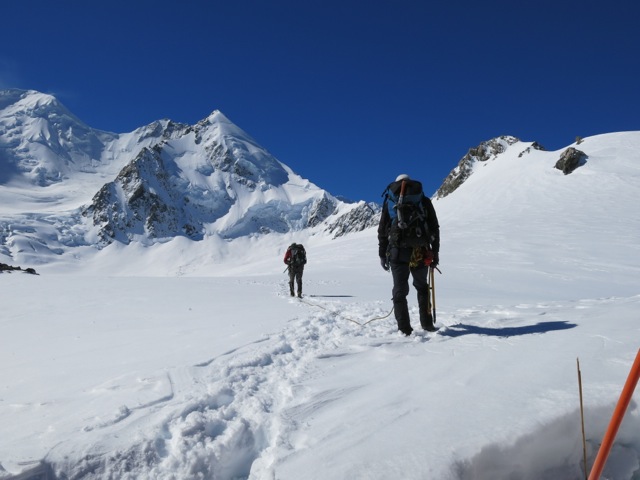 A team of two heading out towards Mount Dixon to stretch their legs and work on skills.

This was the first view we’d had during our climb of Aoraki/Mount Cook when the sun rose. We headed out of the hut in the pitch darkness at 1:00 am under a sky ablaze with stars. The large peak in the background is Mount Tasman. 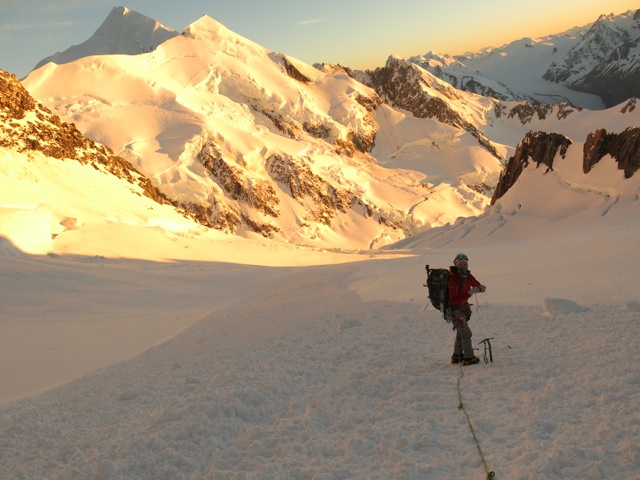 Here Lydia is standing on a debris field from an avalanche that occurred the day before. We waited two days after the snow storm for conditions to stabilize and for lots of these kinds of slides to occur. What you can’t see is that this slope was also covered in “ice balls.” This dropped from ice cliffs above and ranged in size from small round ice cube to cantaloupe to large boulder of ice. They were clear, beautiful, and lethal if you happened to be in the wrong place at the wrong time. 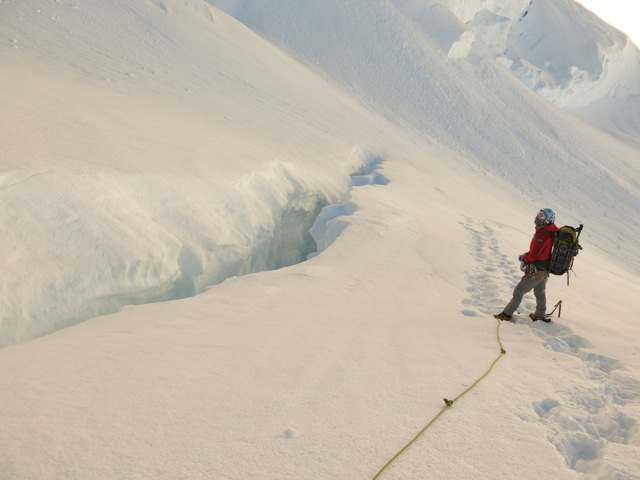 The Linda Glacier route on Aoraki/Mount Cook is “big terrain” and heavily crevassed. My hat (and helmet) off to the first two teams who broke trail on the morning of our climb. Not only did they have to break trail through 30-40 cm of snow, they had to find bridges over many huge crevasses such as the one that Lydia is standing beside.

The descent was quite warm and here we are celebrating that we are almost back at the hut (seen at the mid line of the photo on the right of the image). You can see that Lydia has herself all protected from the “death star” a.k.a. the sun which is quite powerful both in New Zealand as well as on the glacier…put the two together and you have the recipe for a good sun burn.

A view of the glacier lake at the end of the Tasman Glacier during our helicopter flight out. Did I mention that this “flying out thing” could spoil a girl? The flight out allowed us to spend two days working on my technical rock climbing skills rather than hike/climb out. 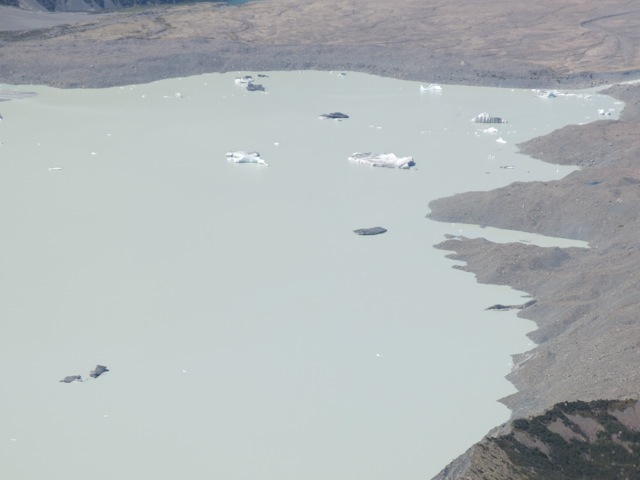 Looking down on icebergs that have broken off the Tasman Glacier floating in the lake. The water doesn’t look blue yet because it is full of glacier silt. You can see the changeover to that awesome glacier teal colour in the photo above. More coming about the climb and lessons learned in a subsequent post.