On this 50th Anniversary of the raising of the Canadian Maple Leaf Flag, it seems fitting to officially announce my next climb. I will be climbing Mount Logan, Canada’s highest peak in May 2015. Mount Logan (5959 metres), located in the St. Elias Mountains of the Yukon Territory, is one of the most massive peaks in the world. It marks the high point of Canada and is second only to Denali for the claim of North America’s tallest.

Since climbing Denali, North America’s Highest Peak in 2005, I have been a “public dreamer.” By this I mean, I have been sharing the highs and lows, in and outs, joys and challenges of trying to climb the highest peaks on each continent while at the same time encouraging youth (and everyone else) to have big dreams and big goals and to be more physically active. 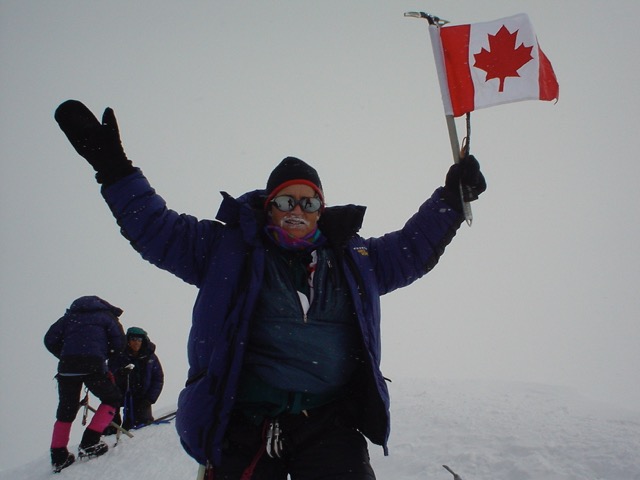 I carried a Canadian flag to the summit of Denali in 2005 (picture above) and I look forward to carrying the same flag to the top of Canada in 2015 along with 5959 dreams…one for each metre of the mountain’s height.

You can email me, Facebook me, tweet me, mail me, phone me, etc. with your dream and I will carry it in confidence, with care, and with honour as high on the mountain as I can (and hopefully all the way to the summit if weather, health and circumstances allow). I look forward to sharing this climb with all of you once more and hope you will trust me to not only be a public dreamer but also a dream carrier.

The future belongs to those who believe in the beauty of their dreams.

3 Responses to Mission 5959: Climbing to the Summit of Canada with 5959 Dreams