Paddling North: These Boots Were Made for Humbling 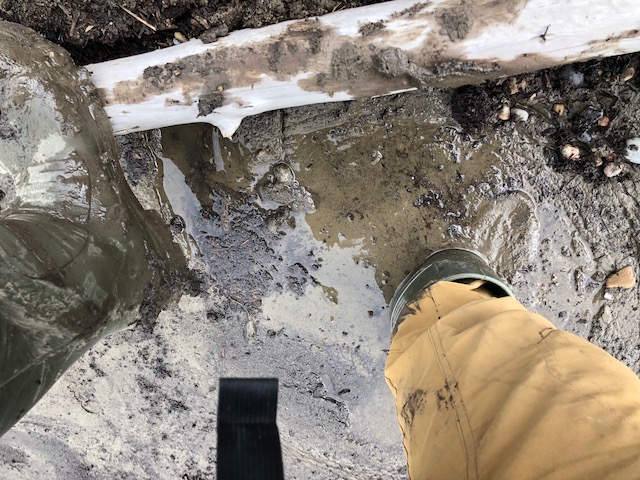 So this happened. I wax eloquently about the experience of being in this vast place and then it smacks me down a few notches. My mom used to say, “Don’t get too big for your britches,” when we were acting cocky as kids. This place offers the same advice to me fairly often or in others words, it hands me my @ss!

Let me interpret the image above. One of my boots is absolutely suctioned into 15 inches of quick clay, the other boot, most fortunately, is not. This is my deepest sinking into quick clay of the trip and to quote parental advice one more time, “I should have known better.”

You see, we were going for a walk to see if there was a better place to move camp to, to get out of the wind. We’d walked to a point and then I noticed a small bay that would be in the lee if we could get to it. The only thing in our way was a one foot wide stream.

We’d been visited by some dogs last evening and we saw their prints at the stream crossing. They had sunk into the clay quite a bit for medium sized dogs. That should been my first clue and raised a warning in my mind. We’d also spent weeks dealing with quick clay loads and unloads of our canoe sling the Athabasca and Slave Rivers. This should have been my second clue. We learned to use driftwood as floatation we wouldn’t sink so bad and have to fight the suction.

It’s very handy most of the time that Marian and I have “different wiring.” I’m prone to jumping in with both feet, often off diving boards or cliff edges whereas Marian, takes her time, analyzes the entire scene then wades in a little more gently than I.

Thank the goddess for that this morning, as without that pacing difference, I would no longer have two boots to wear on the trip.

So, back to the stream, I thought if I just moved quick enough, I could get over to the sand bank on the far side side of the stream. Wrong! My first three steps went well and the fourth one, not so much. My right boot sank. Sank big time. Instantly suctioned into place by the quick clay and the harder I struggled to extricate the boot, the deeper it sank (of course).

I finally stopped sinking at the one inch mark of my boot. I kept the other boot high on the bank but I was stuck big time. I suspect Marian had to bite the insides of her cheeks not to laugh at my predicament. She kindly began to fetch driftwood for flotation. One big log gave me a foothold for the free foot.

I began to use a stick to try to dig the clay out from around my boot. Without a shovel, it took hundreds of throws to reduce the amount of “wet cement” around the boot. As fast as I threw it away, it slumped back in. It was easy to be drawn to into frustration and helplessness but small increments of progress were noted. I tried extracting the boot by pulling with my foot with all my might and at other times, balanced precariously on the log in one socked foot, tried pulling with both hands. All to no avail and almost to being butt first in the quick clay by losing balance backwards. 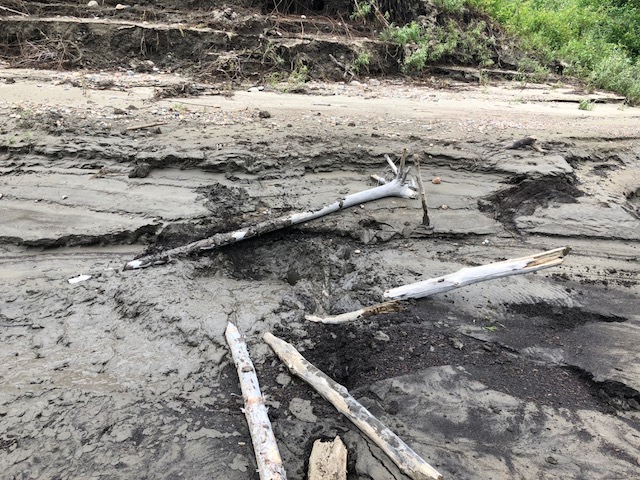 Finally after an eternity of 25 minutes of stuckness and throwing oodles of mud, I finally managed to free the boot enough to release the suction at the heel and then with a bit more digging, the toe. Fortunately, Marian had dropped a log bridge for me to use, and I crossed back to firmer ground. Feeling humbled, embarrassed, and thoroughly spanked, I saw the series of decisions that led to me standing there trapped and almost helpless. If I’d been alone, it would have likely meant the loss of my boot. We walked back to camp, laughing at my poor judgement and reliving the finer points of getting me unstuck.

In my earlier post, I’d mentioned the short interval between decisions and consequences and this morning was no exception. It’s one of the main reasons why wilderness therapy can be so powerful for clients and why I love being out here so much. It regularly hands me my @ss and teaches me (experientially) to remember the big picture, to think before I leap, and to laugh hilariously (with compassion) at myself.

2 Responses to Paddling North: These Boots Were Made for Humbling