Making A Mountain out of a Molehill: A “Climb” of Denmark’s Highest Peak

Mountaineering is never far removed from controversies of style, ethics, and access. Denmark’s Mollehoj is no exception. It was only crowned Denmark’s highest “natural” point in 2005 when re-measurement and disqualification of ancient burial mounds gave it, the five centimeters it needed to be “Number One.” Though many have heard of Everest, Kilimanjaro and McKinley, not so numerous would have K2, Mount Kenya, and Mount Logan roll easily from their lips. For me, I found all Danish peaks hard to pronounce and even harder to find on a map.

Attending a conference brought me to Denmark, but I knew my visit would not be complete without a climb to its highest point. Fortunately, it was located near Aarhus and I could, access its slopes via public transportation. Complementing the Dane’s awesome bikeway network, the bus and train system lets you tuck into every nook and cranny of countryside. The Rejseplanen website is the “key to the city” or more aptly, the key to the country. Enter your destination, it lists out the various ways, modes, and conveyances by which you can get there, down to including street by street walking directions with map (when needed).

Through my copious pre-trip research, I knew Mollehoj (#1) was near Ejer Bavnehoj (#2 formerly #1) so I typed that in. Presto…out pops the directions. Walk from the conference centre to the bus stop, take bus 123, to Aarhus then get the train to Skaterborg, then find the next bus stop and transfer to bus 107 and then walk 4 km to the base of Ejer Bavnehoj. Sounded simple enough…as directions often do until you try to put them into practice. Since I had mastered the first part of the journey on my way to the conference, there was little stress in that part of the adventure.

I wanted to use up some Kroner so I stepped up to purchase my ticket from a person instead of my preferred automated ticket (and so I don’t have to talk to a person, because I am shy) machine and said, “Skaterborg.” Having visualized the moment of pronunciation so much in my mind, I probably said it much more confidently than I meant. The clerk responded in a fast flung string of Danish syllables that I didn’t any clue what they meant. I cocked my head and said, “huh?” He repeated the dervish. I replied in English, “Could you please tell me what you just said in English?”

“Phew.” The train on Track Five wasn’t on my rejseplanen (I think that work must mean journey plan or something but I’m just making that up and I don’t have a web connection to use Google to translate it for me) so I went to Track Three–better safe than sorry in the world of shy travelers. One stop later I was at Skaterborg Station looking for the bus…using intuition as my first strategy since there didn’t seem to be “follow me to the buses” signs, I first went wrong and then went right. 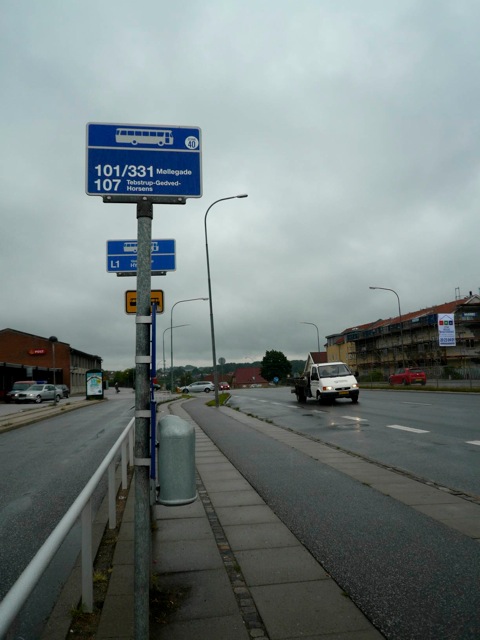 I found the 107 bus stop and got the piece of paper out on which I’d written the destination for the bus driver, Tebstrup. He said 20 Kroner (since I had no clue how to pronounce Tebstrup they was no danger in being taken for a Dane.)  I knew it would take approximately 14 minutes to get there and tried to follow along on the list of stops I’d copied down. Gotta love those street and town signs and soon I was stepping off the bus knowing I was a 4 kilometer trek from my mountain. My rejseplanen has several jigs and jaws in town before hitting the main road that I was to hike along but fortunately, I walked half a block and spotted a turn right to Ejer Bavnehoj sign, perhaps the navigation wouldn’t be too hard after all. The climb was gradual, probably better described as pastoral as the road/bikeway wove gently up towards Ris. Senses all set to record, I took in small rural village life in Denmark. Wheat fields in shades of olive and mustard drew my eye. I was reminded of the joy of coming into a village on the trek to Everest base camp and entering Ris felt the same way.

Stone and brick cottages lined the street with gardens fully underway in most front yards. Shortly have leaving Ris, I caught my first glance of Ejer Bavnehoj. Its English name is Beacon Hill and the stone tower provides commanding views of the countryside. Another kilometer of hiking delivered me to the tower. I paid my five Kroner and climbed the spiral staircase to the top. I shared the top with a young Danish family whose kids enjoyed shouting down the staircases and listening to the echo of their voices return. While most visitors were content with this view, my mission was not complete and I turned my attention to the “summit ridge.”

Between a gauntlet of friendly bovine energy, lay a green track that led to Mollehoj, Mill Hill. I wondered what dangers lurked again given a sign that prohibited baby prams from continuing.

Another sign warned that the cows would be nosy but would do no harm. As I passed through the gate (leaving my pram behind), the cows came dancing and prancing from all corners of the paddock and lined the fence in welcome. I walked down the green aisle feeling a bit like mountain royalty and quickly found myself at the millstone. 170.86 (the decimal remainder is critical in this matter) meters above sea level-Denmark’s highest natural point! I’d made it. I had another country summit to add to my growing list (Mollehoj is Number Eight). 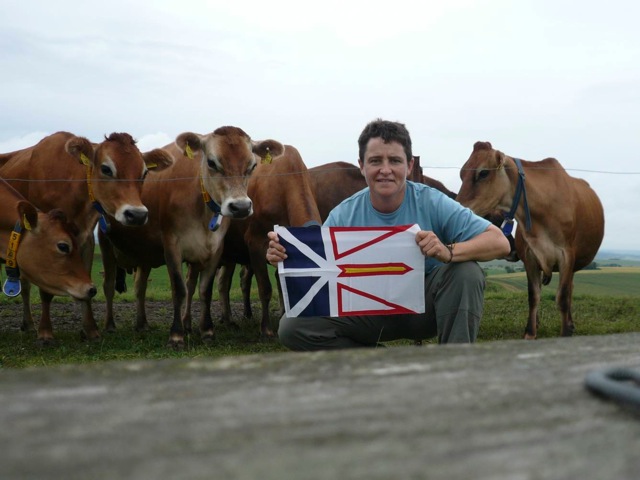 We had been briefed in Everest base camp about the importance of summit photos in helping prove the veracity of a summit claim. Remembering those tense instructions, I made sure to include the millstone as well as many of my teammates in my summit celebration photos. The weather was closing so I quickly donned my Goretex shell and made for Mogel Hill, the site of the nearest safe bivouac. This, of course, meant I needed to traverse that most feared of Denmark mountain obstacles, “The Bovine Ridge Gauntlet.” The gentle brown beasts seem friendlier somehow on the other side of an electric fence.

As I eased through the fence, the rather large beasts, jumped in joy (or anticipation) at the close presence of a climber. Kicking up their heels, they penned me into one side of the paddock beside the fence and I wondered aloud what their intentions were. The herd leader stepped forward and offered an avalanche of bovine saliva onto my outstretched peace offering (my hand) and she seemed to enjoy the feel of Goretex pro-shell on her tongue. I didn’t quite feel up to returning the greeting in kind and pushed my way forward through the manure-laden path to the next gate. I passed three more herds of the dairy variety before reaching Mogel Hill and a view of the glacier scoured landscape.

As the day was getting on, it was time to begin the descent back to Tebstrup. Knowing most mountaineering accidents happen on descent, I visualized the best line and steeled myself for the daunting down climb. Traction through the manure was dicey and I caught myself several times in the nick of time-if only I hadn’t left my crampons in the hostel. Given I’d chosen a “go light and fast approach” to this mountain, forgoing food, shelter, and water in exchange for speed, I returned to Tebstrup quite hungry and thirsty. In honour of my teammates left on the mountain, I picked up some yogurt and a container of chocolate milk to enjoy on the bus ride home. 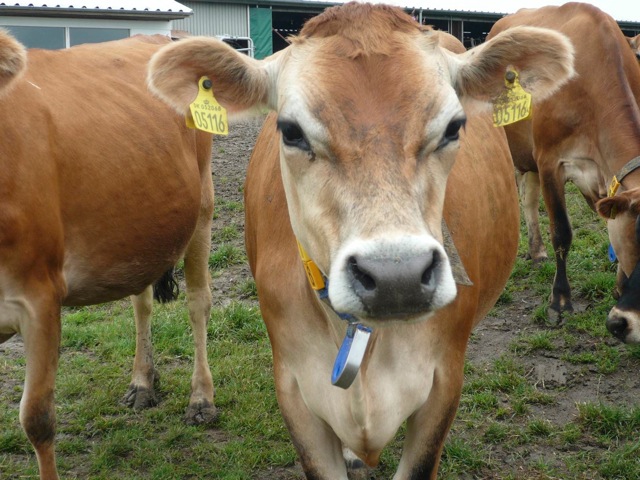 Though a molehill in terms of its overall height, I enjoyed my summit climb of Mill Mountain tremendously by experiencing the joy of exploring new territory and the clarity that any long walk brings. It was a very “moo”ving experience and one that I was very glad I dairyed to undertake. I herd the support of my teammates every step of the way and I’m sure I will milk the climb for everything it is worth.

(My apologies for the pun-ishment).

6 Responses to Making A Mountain out of a Molehill: A “Climb” of Denmark’s Highest Peak