Antarctica Countdown 13 Days and Counting: See One, Ride One, Pull One

When I used to work at summer camp, we joked that in our first seasons, we often had to operate out of the mantra of “See One, Do One, Teach One.” This morning was Bobble-Head Ted’s first session training at tire pulling on Signal Hill. When climbing Mount Vinson, the move from Base Camp to Camp One involves pulling sleds loaded with expedition gear along the Branscomb Glacier. So, early this morning, Bobble-Head Ted to his training mantra of “One, Ride One, Pull One!

See One:
For the first tire pull of the morning, Bobble-Head Ted had the prime “seat” and responsibility for tire watching. He monitored progress and was on high alert in case the tire flipped over. I said to Natelle, “It’s like having eyes in the back of my head.” 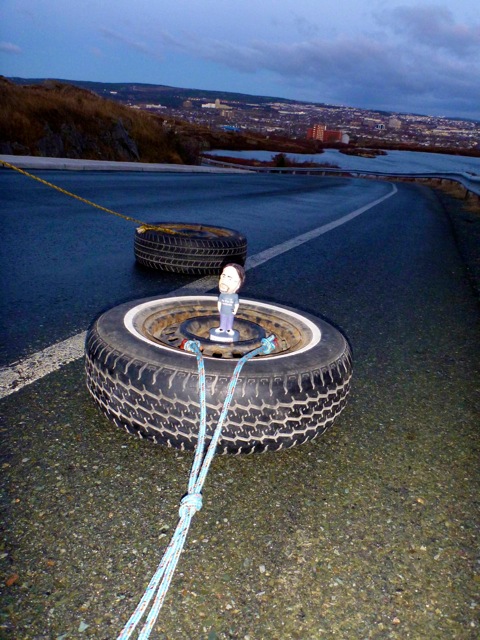 Ride One:
On the second go up the hill, Bobble-Head Ted insisted on a new view, this time, riding on the tire. He demonstrated the excellent core fitness for balance and stability on the tire.

Pull One:
Bobble-Head Ted made a valiant effort but this tire-pulling task was a little out of scale. He promised to train hard this week and come back next week with new strength and a pint-sized tire.

It was a delightful morning to be out, the fresh breeze kept us cool and refreshed, and the lovely morning light eased us into the day. It’s much more fun pulling in the morning now that daylight savings time is over (though the 4:30 pm darkness is harder to take). I look forward to 24 hours of light while in Antarctica (what a treat in the middle of our darkest season). Congrats to Natelle who pulled her tire the full height of Signal Hill this morning-you gotta love a friend who gets out of bed early for no good reason other than supporting her whacky mountaineering friend. Less than two weeks to departure. Wow! Getting excited now. Butterflies are multiplying. All’s well.