Today’s volcano was called Boqueron…Big Mouth! Rather than starting our volcano climbing adventure with a climb, we started it with a big descent into Boqueron’s crater. Somewhat reminiscent of the “Bog Down in the Valley-O” song, the main crater has a smaller crater in it…Boqueroncito…or “small boqueron.” The suffix “ito” or ita” is often added in Spanish to diminish a noun…to give indication that something is smaller. This smaller crater was formed when Boqueron last erupted in 1919. Boqueron is known to erupt every 90 years or so…so if you do the math, it’s likely due an eruption soon so we were glad to be spared the excitement of being in the crater when the “once in a lifetime” occurrence occurs.

The 400 metre descent was steep and slippery. A few sections needed rope and it was a good morning’s walk to get down to the bottom. Using my telephoto lens, I could see that the rocks in Boqueroncito spelled “Palomo” when we began out descent. When we arrived at the bottom, it read “Canada.” We thought it was a wonderful welcome! The climb out was faster than the descent because some of the terrain was easier to climb up than down. It reminded me of my many trips in the Grand Canyon. It was a hot day but the dense vegetation in the crater provided shade much of the way both down and up. 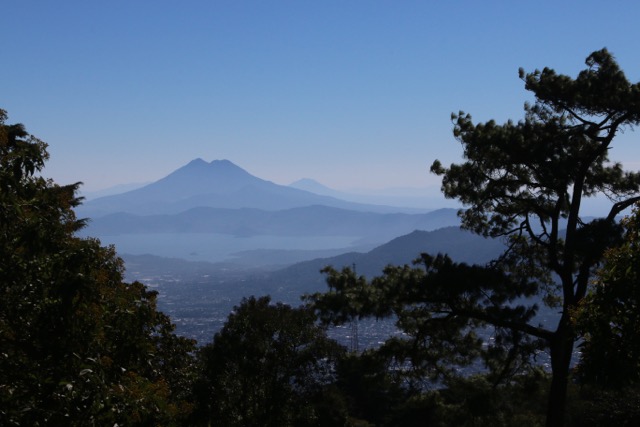 The view from Boqueron were spectacular and we saw many of the volcanoes we are going to climb in the next two weeks. Volcanoes are classically steep and sometimes the footing is very challenging depending on the type of stone/ash on the sides.

This entry was posted in Volcanopalooza and tagged 2015, climb, El Salvador, train, volcanoes. Bookmark the permalink.