This adventurous decade countdown post comes from when I recently returned from climbing the highest peak in Antarctica in December 2011 and was trying to find words to describe the vast white place I had just experienced. It was originally posted on December 20, 2011. 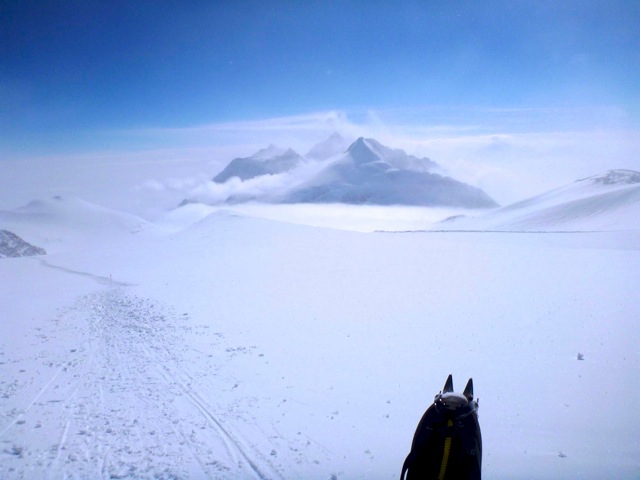 OK…I’ve been trying to write this blog entry for 24 hours and I guess I just have to admit that I am lost for words. Or a starting point. I’m missing a place to jump off in trying to explain what and how and why the past few weeks were so powerful as to leave me fighting to write, when usually the descriptors come flowing from my finger tips into the keyboard and dance across the screen, like lightening in the summer sky.

But instead, it’s all changed. As my friend, Terry Watson, warned me it would, “Antarctica changes you,” she said simply. And it has. And I’m not even sure how. It’s the feeling that remains after an earth tremor, the ground has all moved, and things look the same, but they are not. And I’m not. In a good way.

In a way such that I’m trying to find syllables to describe one million shades of white. The circling, not setting of the sun. A breeze so potent it chills, then freezes quickly, almost without notice. Blue. Black. White. A limited colour palette interrupted only by the colourful dots of humanity who temporarily inhabit the place. The place of perpetual ice and snow. Unending day for months at a time, then night for the same. Remote. Stark. Pristine. Rhymes with the chapel, only more sacred for me.

Cold, hot. Almost in the same second. Needing to give up the duality of those two extremes as they meld into the intensity of my experience of Antarctica. The sound of every footstep. Always heard, most often seen. For centuries. Any trace I leave there will persist. Well beyond me. Even the simple act of a hair falling from my head onto the ice spreads my DNA. I don’t mean to but how do I stop it from falling? I can’t. I don’t. Though I do try to collect the ones that collect in the vestibule of the tent. Along with the errant goose down, busted toe nails, and other detritus castaways of humanness that we accidentally spread.

I know I am small in this landscape. A mere blip on the continuum of humanity. I could be swallowed whole by this place if I am not careful. This place of white. Of snow. Of ice. Of sky so big and wide and blue that it feels like my eye iris might crack or explode from trying to let in all that light that matches it so perfectly. Of blue that alchemizes into white at the frontiers of a horizon so vast it can hardly be perceived, let alone described. Over and over again each day as the sun circles above, my heart beats below in a symphony of appreciation for the sensation of such vastness.

No wonder I don’t have words!

Fortunately, I am a child of the Canadian National Film Board and as such, know the value of a vignette. And of alliteration. And of trying. To find words. That match the pictures in my head. And in my camera. And truly communicate the experience that I am hoping to share… of climbing Antarctica’s highest peak while opening to the lessons presented in each step.

This Vinson journey has been a time of numbers. A countdown from 85 days beginning after seven years of hoping and dreaming. Lojong slogans from one to 24, each one shaping my mind on the way, and knowing as always, it gets easier after taking the first step. So do forgive the faulting start and yet another series of numbered entries…the laboured first few breaths/words of stepping high at altitude…I’ll share additional vignettes from the mountain as they become available through my fingertips and within my understanding, of both the place and my place within it.

This entry was posted in Life and tagged 2019, Adventurous Decade Countdown. Bookmark the permalink.