Every October since my mom, Denise, was diagnosed with breast cancer, I have run the Race for the Cure in her honour. I vividly remember the first time I wrote her name on my race bib. I was just learning to run and I wasn’t sure I could do the entire five kilometers.

During the race, there were times I could hardly breathe as I was overcome with so much emotion. After the race, I sent that race bib off to my mom with a note expressing my love and hopes for her recovery.

As each year passed since then, I felt both sadness and anger as the list of names I added to my race bib grew. It seemed as though every month I was hearing of a friend or family member that was affected by breast cancer. I’m going to miss this year’s race. Instead of running shoes and T-shirt, I will be donning climbing boots and soft-shell jacket. Instead of writing my mom’s name on my race bib, I will write it on my ice ax. Instead of running around Quidi Vidi Lake with thousands of others close to home, I will be the only woman on an expedition climbing Mount Pumori thousands of kilometers away in Nepal. 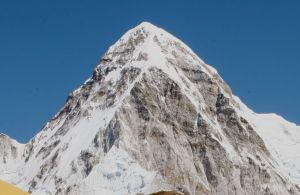 The name, Pumori, is translated as Everest’s daughter. It is a 7161-metre peak that sits across the valley from Mount Everest. I am dedicating this climb to my mother, a breast cancer survivor, and to all who have also had to make the mountainous journey through breast cancer. By honouring those who’ve faced breast cancer, I hope to heighten awareness of breast cancer prevention, screening, and early detection.

I know I lead a healthy lifestyle and get plenty of exercise, but I have many risk factors for breast cancer. I started menstruating early, I have never been pregnant, and my mom had breast cancer. Sometimes I think, “It’s not if I get breast cancer, but when?” With this climb, I intend to raise funds for the Canadian Breast Cancer Foundation – Atlantic Region because they are committed to creating a future free of breast cancer through awareness and research. I have set a fundraising goal of one dollar per metre of the peak.

It is tradition on climbs in Nepal to fly prayer flags over base camp. These colorful flags have prayers printed on them and are blessed by a Lama during a ceremony before the climb. For each donation of $20, a prayer flag will be dedicated and flown over base camp for the duration of the expedition. One hundred percent of the money raised through the climb will go directly to the foundation (i.e. none of it will go towards the costs of the climb).

By climbing Everest’s daughter, I hope to contribute to a future for all children that is free from the suffering caused by breast cancer. With each step in training and each step up the mountain, I will keep both the mountain and the larger cause for which I am climbing in mind. I will remember my mother’s strength and courage in facing her treatment and draw upon that during the inevitable moments of doubt and discouragement as I attempt to become the first Canadian woman to summit Pumori.

I look forward to having you along in the upcoming months of training and on the climb. Your support helps me reach new heights in many aspects of my life.

This entry was posted in Pumori and tagged Breast Cancer, climb, Climb for Awareness, mountain, Nepal. Bookmark the permalink.