Shakedown for the Summit

Sitting here in my chair after an epic climb of Signal Hill to do some gear testing in today’s big blizzard. When I saw the forecast, “Snow at times heavy and blowing snow. Amount 20 cm. Wind west 60 km/h gusting to 80 except gusting to 110 along parts of the coast. High minus 4,” I couldn’t resist going out in it. As St. John’s winter weather is often mild, it’s hard to find extreme conditions to test combinations of clothing and gear in but this week was an exception. You can check out today’s shakedown mission here: http://www.facebook.com/album.php?aid=379576&id=509940550&l=af2633e943

Some will remember that last February, I ventured north to Iqaluit to attend a polar training program led by Matty McNair. “One of the key factors of any polar expedition,” Matty coached, “is the shakedown.” She hounded us over and over again to experiment, test, recombine, futz, retest, and retool our gear and clothing systems before any big expedition. Matty suggested that all gear be chosen at least one year out so there would be ample time for testing and then adapting systems. I hear her loud and clear and have been evaluating clothing I have used in the past and acquiring some new items in the meantime.

I’m on a two-month countdown rather than Matty’s suggested 12 months but am making good progress towards clothing combinations for various conditions and elevations. Tuesday night delivered fairly cold temperatures (for here) and a good stiff wind resulting in a wind chill of minus 27 Celsius. After playing two games of hockey, it was time for a different set of “padding.” When climbing the upper reaches of Everest, climbers often choose to cloth themselves in a down suit. Rather like a sleeping bag with arms and legs, the down suit provides warm to slow moving climbers (remember high on the mountain it can take four to six breaths to take each step) in the super low temps of high altitude.

Given I am a fairly warm-bodied creature who pumps out heat rather easily, I have often feared immolation if I ever tried to wear my down suit inside. Marian was game for a late night visit to the top of Signal Hill to take the suit through its paces (actually its zippers.) I discovered that certain zipper pulls used for certain elimination tasks were too short and needed lengthening–good to know now rather than being stuck with an open zipper that I can’t reach at 8000 metres. Marian drove me up and was kind enough to record the evening’s antics/costume for posterity. You can check out the her artwork here:

Wearing the down suit is an intense experience as its fluffy folds cut you off from the environment and create kinda of a sensory deprivation situation. Add to the suit a practice oxygen mask and goggles and the transition to urban astronaut is complete! Wearing goggles makes it a challenge to see your feet; add the practice mask and that challenge doubles. The practice mask had its air intake near the bottom of the mask so every time I tried to look down, my air supply was completely cut off thus being an even more realistic rendition of high altitude. The winds were strong enough to move us around a bit as we climbed up to the summit cairn near the Ladies Lookout. I’m hoping for a few more low temp wind chill moments to go out again with a few more combinations of clothing layers underneath my Pillsbury Dough Boy suit but overall it kept me quite cozy!

This was a fifty percent week. The break in training hours and intensity gave me a chance to catch up on a few tasks and attend a few appointments. The first part of the week seemed to be filled with “summit” energy–things were cruising along and feeling great. The second part of the week was filled with more “valley” energy–things seemed harder and I felt more fatigued. Funny, how I can be more tired during a rest week than during a big training week. Having both energies in close proximity reminded me that it’s good to practice being with/in the valley sometimes. Of course, the summit is much more fun but like the tide, energy ebbs and flows. The key is to flow with it and not attaching too much meaning to either end of the spectrum. I noticed my mind’s temptation to ramp up a bunch of doubt as my energy flagged.

I thought back to my 2007 expedition and wondered what effect arriving at base camp with bronchitis had on my entire experience. I’m guessing it sent me careening towards the valley (both figuratively and eventually literally) and set off some of the same thinking I had this week. I’m grateful for the chance to see it here when my mind is less clouded my altitude. I can practice working with my mind on it now, do some meditation, and remind myself that likely more than half of the challenge of Everest is mental.

A few weeks back at the invite of Michelle (of tire pulling fame), I attend a kickboxing training session. It was so much fun that I’ve been going along with her since. There is something very elemental in learning to punch and kick. As a kid, I studied judo. I loved the discipline and learning to throw people and now it’s being great to learn to throw punches. About a year ago, I first gave voice to an idea: “I want to learn to fight,” I said to myself. I had no idea what that meant or exactly why…other than a long term dream of wanting to bike from Tuktoyaktuk to Tierra del Fuego and wanting to know more about self-defense before taking that on. I consulted a few friends who’d studied some different martial arts and poked around a few gym websites but never took any action on it.

There is always such joy in learning a new skill and this has been no exception. The outward learning of weight transfer, punching combinations, and intense interval activity is fabulous. There has been a more subtle inward learning as well related to connecting to a more primal level of assertiveness/anger than I usually experience. I still don’t really know what it all means but I do know it’s darn fun and I have a sense it’s going to come in handy at about 7500 metres as I “fight” to leave Camp Three for Four.

The blizzard abated Saturday morning just in tire for another epic pull up the hill. I was joined in this somewhat ambitious post blizzard activity by Natelle, Michelle, and Marian. On the first pull, the snow actually gave us a break reducing the friction we were pulling against. On the second pull, drifts started depositing snow across the road giving us barriers to surmount and bigger wind chills to guard against. The last half pull yielded and we could celebrate the longest pull to date 2.5 up and 2.5 back…in all a nearly 3 hour of experience of good, solid, hard work. Thanks to my tire pulling team mates–you make it all much more fun to do! Kent Barrett captured us in action and his commentary still has me laughing…check it out here: 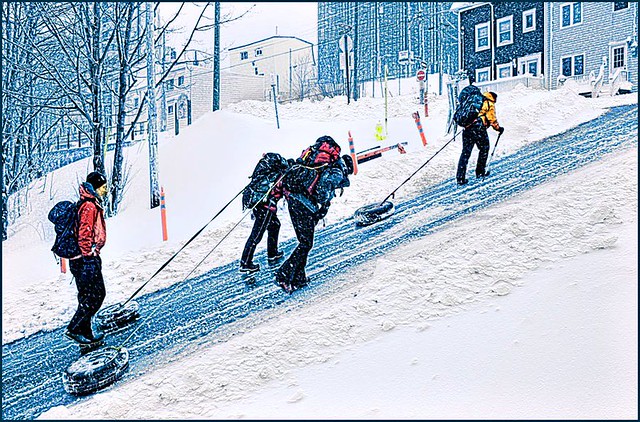 Marian also captured some of the action on the hill this morning and you can see her photos here:

I still have Everest 2010 toques for sale. The have an embroidered Everest 2010 Logo, black knit exterior and pile on the inside for a double layer over the ears. The toques are $20 each including tax (shipping is extra). Email me if you are interesting in giving some toques a good home! I’m also still selling my book, “More than A Mountain: One Woman’s Everest.” If you email me and said the codeword “shakedown,” I’ll give you the conference rate deal of $20 including tax (shipping is extra).

Commercial ended…
Hope your week was filled with lots of learning, fun, and you found a few things to shakedown as well.

Catch ya in seven,

1 Response to Shakedown for the Summit