Your Guess is As Good as Mine

So after months of hemming and hawing, sorting and sighing, planning and proposing, looking and logisticating…I’ve finally decided what to climb next BUT I’m not telling just yet. In the spirit of fun and frivolity, I’ve been releasing a photo clue each day on my blog and readers have been guessing. The person with the first correct guess will receive a souvenir from the climb. If you want to join the fun, you can visit my blog (https://taloeffler.com/tas-blog/ ) to see the first four photo clues and you can post your guess to the comments section there. The climb is occurring in December and so far, I think we’ve added about ten climbs to my overall life list–not good if I want to settle down and sit on the couch 🙂

TA chasing down the puck!

It was great to finally make a decision about what adventure was happening next and buy a plane ticket. Always good to have a plane ticket in my back pocket. I’ll slowly start ramping up training again now and hockey will soon be going full tilt (one of the photo clues pertains to hockey). Scored a hat trick last night and one today so life on skates is feeling rather divine at the moment. Got a few more presentations upcoming this week and can’t believe that November is just around the corner.

Congrats to Marian-she can now leave me in the dust since she has her full motorcycle licence.

Congrats to Marian who passed her motorcycle road test yesterday! After a short celebration at Tim’s, we had the most heavenly ride on the gravel roads behind the Goulds. We both now have complete body armour (and as a result look rather like robo cops-especially when we take our protective jackets off at Tim’s) and so we felt much freer to experiment with different riding techniques in the dirt. 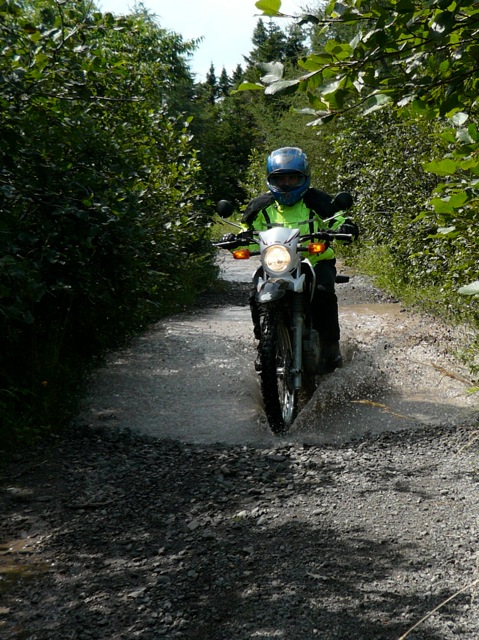 The weather was alternately rainy and grey, brilliant sun, and rainbows with every transition between the two. The fall air was heavy with the earthy tomes of rotting leaves and manure, a scent that reaches deeply in and signals both the change of season and often other things as well. I felt, at times, as though I were one with the bike and at other times, felt as if I was weaving down the fall line of a mountain ski slope in perfect powder. I leaned the bike from side to side alternating the waiting on each foot peg–just like carving a transcendental downhill turn! It was a good ride-can you tell? 🙂

Here’s a link to our training rides getting Marian ready for her road test:

A short update this week since a picture is worth a 1000 words…and there are four pictures already this week…so that’s 4000 words just waiting for you! A reminder that if you don’t want to miss an update or post to my blog, you can subscribe on the right hand side and updates will be sent either daily or weekly-you get to decide. The new blog architecture is working well for me and is streamlining things somewhat so that will be great during the December climb because it will make it easy to share pictures and stories along the way. Thanks and have a great week!

This entry was posted in Motorcycles and tagged 2010, What is TA Climbing Next?. Bookmark the permalink.