On the Eddy Line

September is always a transition month…from summer to fall, vacation to school, summer camp back to work…and now, for me, from the wilds of Labrador to the clamor of the city. I always hated coming home from camp after spending the summer living outdoors with intimate knowledge of the moon’s phase and light, the timing of the stars’ appearance in the night sky and the dampness of dew on the grass in the morning.

In whitewater paddling, we’re always on the lookout for eddies, a reversal of current caused by an object (usually a rock) in the river that creates an obstruction behind which the water quiets and changes direction of flow. There is a line, the eddy line, that marks the transition between current going one way and current going the other. This line, if not paid strict attention to, can cause trouble and even capsize your boat if you are not careful to heed the change in the water’s flow.

As you cross over the eddy line, it is critical that you change the tilt of the boat…when running down river you often maintain a downstream tilt but as you turn into the eddy, downstream becomes upstream and vice versa.

I feel like I am on the eddy line between the Labrador wilderness and my urban existence. Water is going both directions around me and I am hesitant and grieving to leave the simplicity of river life behind and plunge into the complexities of modern urban life. The world seems awfully stimulating after seeing no sign of other humans for 16 days while descending the Notakwanon River. When the floatplane dropped us off on that small beach in a lake near the headwaters, our team of six knew the only way out was down the river, ideally together and upright. As the plane buzzed us, a profound silence descended and we were all alone.

Except for the bear. We spotted it just as we left the beach. It followed along for short while-the wilderness welcome wagon. Trading blackberries for blueberries and fishing poles for the Internet, we set out into “unknown” Labrador. Not nearly as unknown as in the Hubbards’ days but unknown in terms of how difficult the whitewater would be, how the group would come together, how the adventure would unfold. 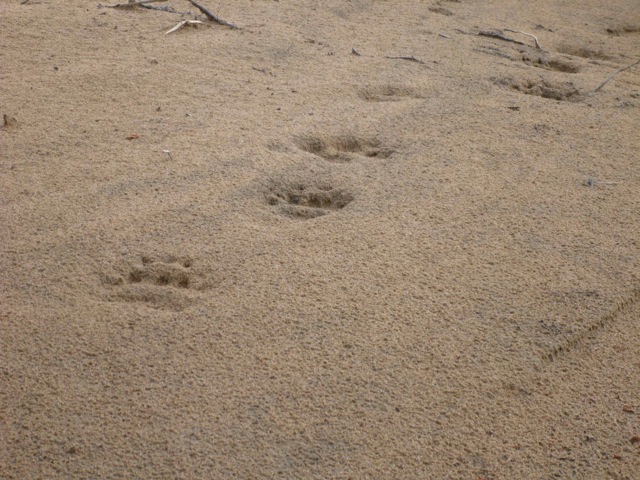 There would be three bears in total and a whole bunch of bear scat. Tracks in each camp but no close encounters. Instead, there were close connections with black flies and mosquitoes and caribou moss so thick you could forego a mattress. Light that changed in a heart beat and fire smoke that danced along the shore shunting the bugs to other targets. Eyes swollen shut and eyes wide open as the land spoke. Loudly and sometimes a whisper. Changing each of us subtly and profoundly with each paddle stroke, each glance at untold mountains, each moment of grace reflecting in the deep pool of wildness that enveloped and cradled us so totally. 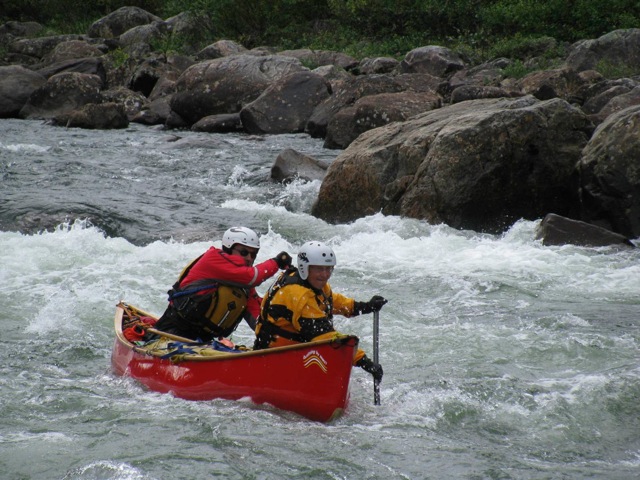 Rapids, some utterly terrifying and others that pulsed exhilaration through us faster that our hearts could beat. Some close calls, some deeply trying times of fighting the current upstream or downstream from a tentative perch along the shore. Or in the water. Along side the canoe. Swallowed by both the river and land. Water whisked into blood faster that the black flies could suck it out. Intense days followed by deep sleep. The night sky ablaze with the aurora’s dance of light–could it get much better? I doubt it.

I’ve fallen in love once more. With Labrador. With a river. With a remoteness that begs both questions and answers in the same moment yet gives just loud silence. I am changed for having come down this river from its source to the sea but I don’t yet comprehend all the ways how as I’m still on the eddy line between there and here–wishing and wanting to be there but knowing it’s time to be here…to seek and find what is there, here.

3 Responses to On the Eddy Line