Trails of Twillingate: All Around the Lighthouse

I wanted to title this post: TA’s Triple A (being that I am so fond of acronyms). It would have stood for TA’s Twillingate Awesome Autumn Adventure! Marian and I put two Twillingate trails together today to have a fine hike we’ve called All Around the Lighthouse! We drove up to the Long Point Lighthouse and found the trailhead sign for the hike. 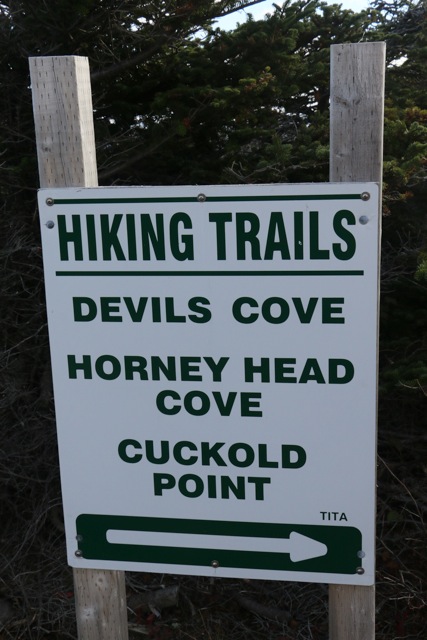 Rain was predicted so we wanted to get an early start. We aimed to lay down GPS tracks to assist the folks at the Anchor Inn and Suites tell people how to find the trail heads-below is an example of the great community signage that can be found at most trail heads.

The autumn day was crisp and sunny and the predicted rain only threatened and spit a bit. The hills were alive with the rose coloured blueberry bushes. I loved how this one was just poking through the reindeer lichen. 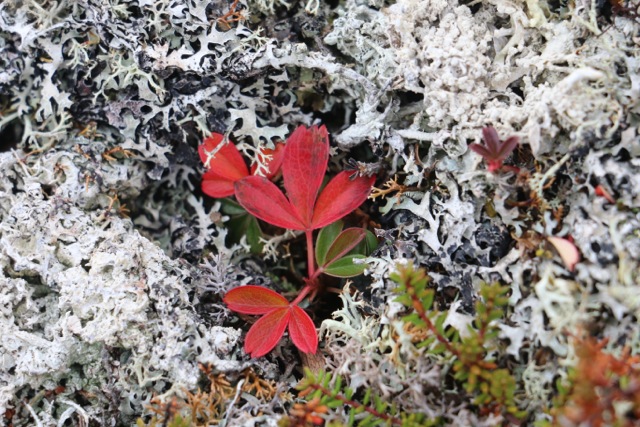 We made sure to look back every once in awhile and see the lighthouse in the distance behind us. The sky was changing dramatically each time the sun poked out from behind the clouds.

New views were revealed each time we came around a corner. 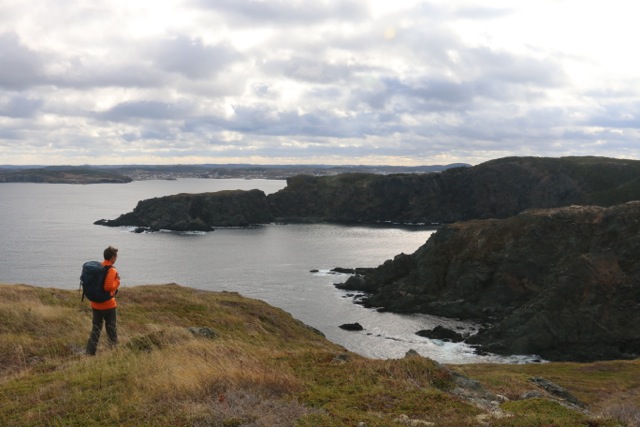 The ocean on this side was in the lee of the headland so was quite calm. The other side was being whipped up into a white capped frenzy by the 60 kph gusts that blew refreshing October winds across our faces.

The hillsides were covered in a mix of green and red!

We collected some spruce “gum”…we’d learned recently that you know spruce resin is mature enough to chew when it turns pink when you chew it. As you can see, ours was aged enough to be great gum (though we now know that it does stick to dental work…quite well).

One of the true pleasures of this hike was seeing the iconic Long Point Lighthouse from many different vantage points.

The halfway mark of the hike passed through the town of Crow Head. 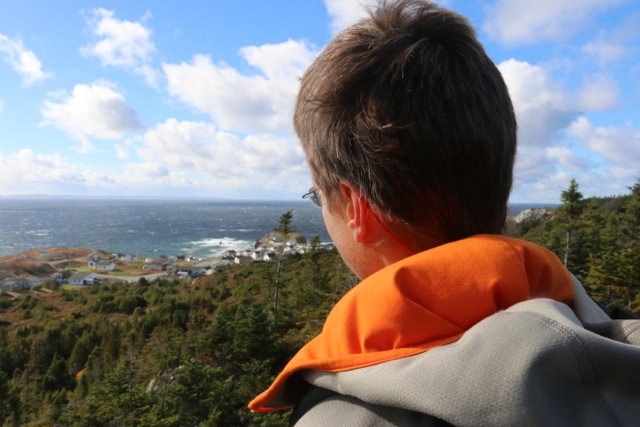 Near the road crossing, we spotted the sign post for the Crow’s Nest Cafe…how fortunate that it was lunch time. 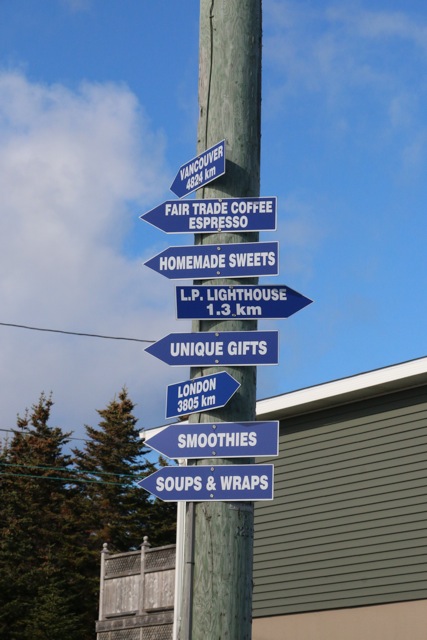 We made ourselves comfy in the sun-drenched cafe and ordered chili, roasted root veggie soup, peanut butter cheesecake and cappuccinos.

What a fine repose and lunch! Perfect for fuelling up for the second half of our hike. 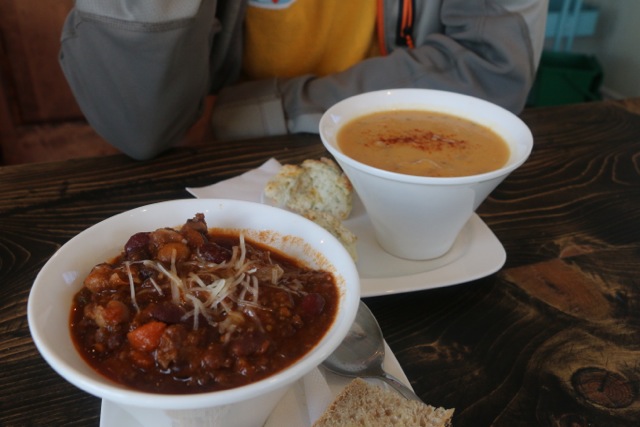 Heading out to Lower Head, we added another root cellar to our Twillingate list. 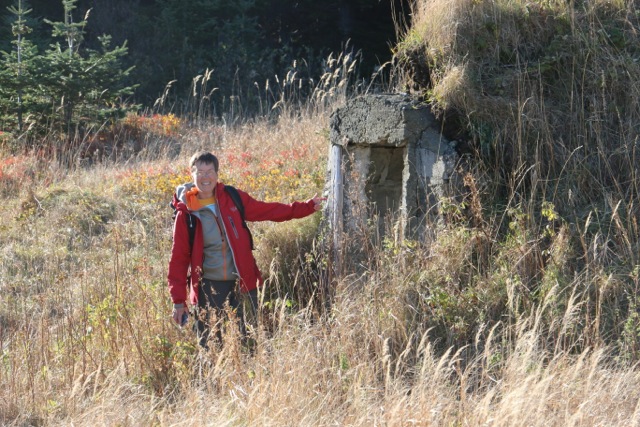 The clouds continued to dance and flow throughout the afternoon sprinkling the rocks and waves with dappled light. 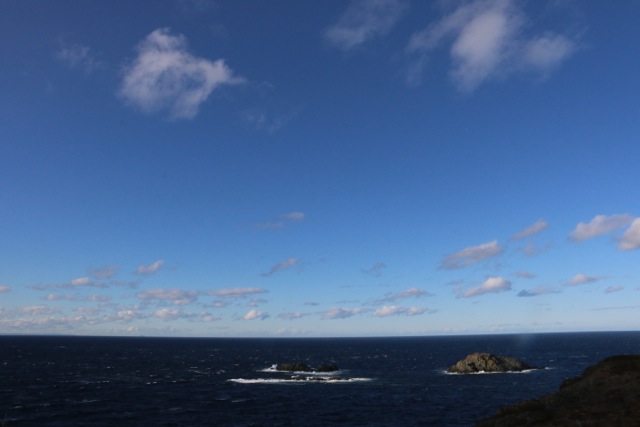 After rounding Lower Head, the trail led us the Sleepy Cove.

And to the beach…

And eventually, back to the Long Point Lighthouse! What a time we had going “all around the lighthouse.”

The total hike was about 11 kilometres with about 500 meters of elevation gain. Minus lunch and breaks, it took us about 3.5 hours of hiking to connect both trails. Below is the GPS track we captured with the trail heads marked on the map. It’s a fabulous circle hike that can be down without a shuttle and takes in some of Twillingate’s best sights. I give it five stars out of five. 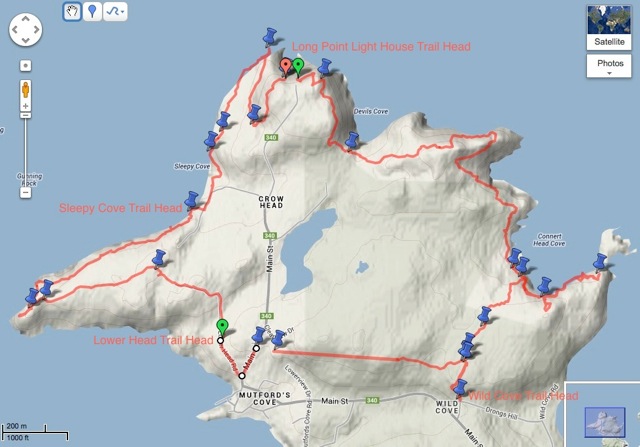 This entry was posted in Newfoundland and tagged 2013, All Around the Lighthouse, hike, Twillingate, Twillingate Trails. Bookmark the permalink.

1 Response to Trails of Twillingate: All Around the Lighthouse