After 24 hours in the travel bardo, I was spit out in Kathmandu without bags and sat phone. The bags have since arrived but I’m really not sure if the sat phone ever will. Let’s just say I had some interesting times in the Delhi airport. But that is a story for another day.

I was welcomed at the airport by Dendi Sherpa and he placed the traditional garland of marigolds around my neck. It’s one of many rituals of coming and going in Nepal that I am so fond of. Dendi dropped me by the hotel and I napped for a few hours. Refreshed a bit, I wondered over to Thamel to say hello to Raj and Kumar and to buy a toothbrush. 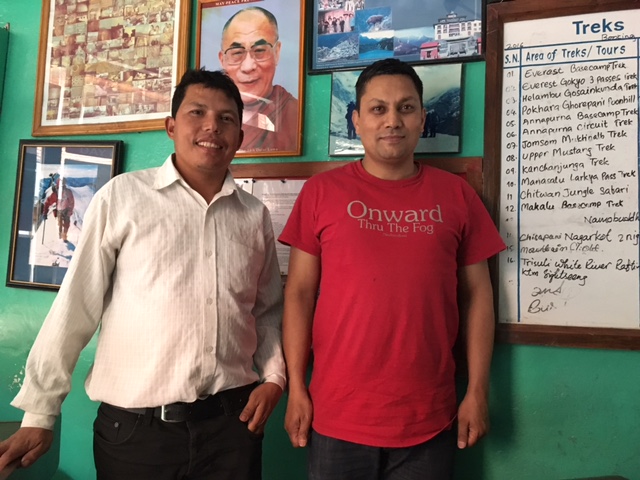 I first met Raj in 2002 and I’ve called him my Nepali brother since. He has helped me organize many treks. I met Kumar in 2010 when he guided some friends to Everest Base Camp to visit me. He will do the same in a few weeks for another group of friends. My eyes were wider today as I tried to imagine how Kathmandu would look on first landing to my friends. This is my ninth trip to Nepal so making the transition into kathmandu’s chaotic streets of honking cars, dodging motorcycles, and slumbering cows happens much easier these days than when I first dropped into the cacophony 14 years ago.

Raj welcomed me with a traditional kata (also spelled khata) that he placed around my neck. We spent the afternoon drinking Nepali tea and sharing stories. Kathmandu, or at least the parts I saw on the drive in today, looked same, same, but different. There were a few piles of rubble where buildings used to be but most looked the same as I remembered them. Some businesses were in new locations but I easily found one of my favourite spits to eat in Thamel, Momo Tarou.

Upon sitting down, the first thing I ordered was a fresh lemon soda. It comes with fresh lemon juice in the glass and soda water. The two mixed together offer a refreshing pause.

The second thing I ordered was a plate of steamed momos. Momos are like Tibetan pyrogies filled with meat or veggies. Momos are one of my favourite meals in Nepal and part of my own welcome to Nepal rituals.

Happy New Year! It’s Nepali New Year today and they are welcoming the year 2073! It’s been a good day for rituals big and small.

Dendi just dropped off my two expedition bags (thank you universe) and he’s holding high hopes for the sat phone in the morning. Hugo, our expedition leader, just just arrived so now things are getting very real.

A big hello to the awesome Taylor-Hoods from this first big day of Everest 3.0. Thanks for sponsoring this “audio post” and I hope you get to hear my voice real soon.