This update is sponsored by the letter, N.

As I hiked towards the Namche Hill (the first major hill of the trek), I contemplated the similarities between Newfoundlanders & Labradorians and Nepalis. I see great strength, resilience, and ability to overcome adversity. I see folks who live in harsh, remote locations looking out for each other and for guests. I feel at home in all. As I approached one of the most famous suspension bridges in Nepal at the foot of the Namche Hill, I decide I wanted to fly the Newfoundland and Labrador flag from the bridge celebrating my connection to both Nepal and Newfoundland and Labrador.

If you look closely in the photo above, you will see two suspension bridges. The lower one is the older one and the higher one is the one we took the picture on. Thanks to Ade for doing a great job of capturing the moment.

Thanks as well to Gemma Hickey for sending me on this journey with this particular flag. Gemma described it as her most prized possession. After her epic Hope Walk across the island of Newfoundland, she was welcomed home by a woman who draped Gemma in the flag. I was deeply touched and honoured that Gemma entrusted me with this precious gift and I will honour her, myself, and all survivors of abuse by carrying it as high on Everest as I am able. As the Newfoundland and Labrador flag unfurled on the bridge, in the presence of many prayer flags and khatas, I felt blessed. I thought of all the crucial people on my path of healing and I gave silent thanks to each of them for the role they played in my coming through with strength, resilience, and ability to overcome adversity. 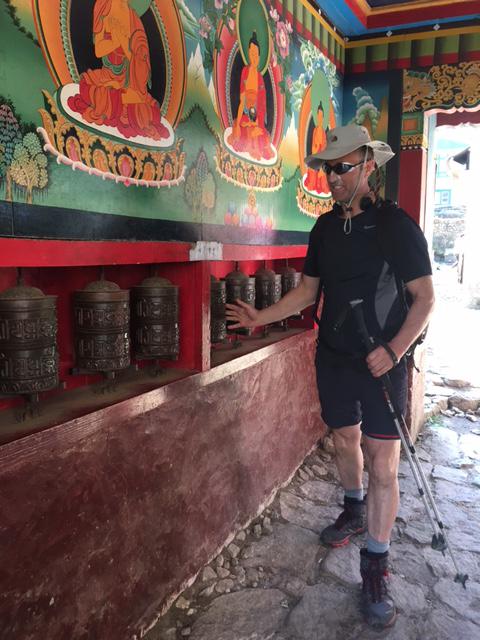 As I ascended the hill, I also thought of all the families of the Sherpas killed in the avalanche in the icefall in 2014. I know this day in particular and likely every day is filled with the pain and grief of losing their loved ones.

Soon after our hike began today, we reached the entry gate of Sagamartha National Park. We checked in and then passed through the gate spinning prayer wheels as we went. We hiked up to the base of the Namche Hill beside the Dudh Khosi (Milk River). The air was warm and we worked up a bit of a sweat. We crossed the bridge and began the slow steady slog up the hill. There were moments where I caught that delicious rhythm of stepping and breathing where you feel at one with the hill. And at other times, I reminded myself that the top of the hill would eventually come. My legs felt a bit tired today but we all came up the hill in good time and style. It took us about 2.5 hours from Monjo to Namche.

Thus far, everyone is feeling OK. We had a great lunch. I chose garlic soup (thought by Sherpa folks to aid in acclimatization-not to mention delicious) and chicken curry with rice. I began my day with a Nepali breakfast of veggie curry (potatoes and green vegetable), rice, fried eggs, and chapatti (flat bread). Thus far, I’m eating well and enjoying every meal. We have a saying that goes, “She or he or they who eat and drink the most, get to the top.” 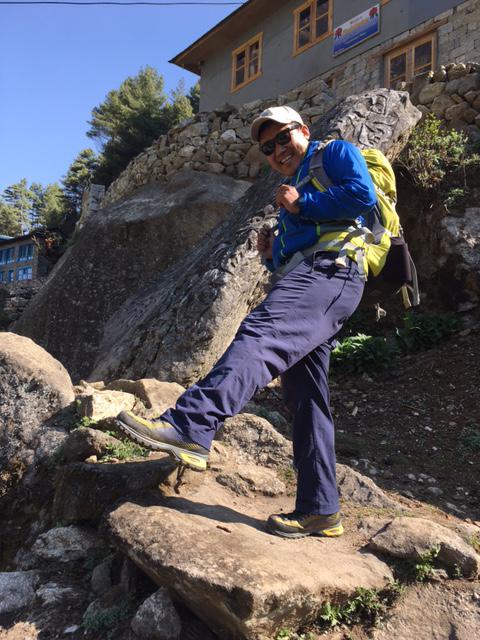 Here’s the photographic evidence that I gave Dendi back his boots. They are super light and comfy but it was good to be back in my familiar footwear. We’re in Namche for the next two nights. Today folks are headed up into town for some bakery and shopping. Tomorrow we go on an acclimatization hike to Khunde and Kumjung. This is the first time in over a dozen stays in Namche that I am staying near the bottom of this vertical village. 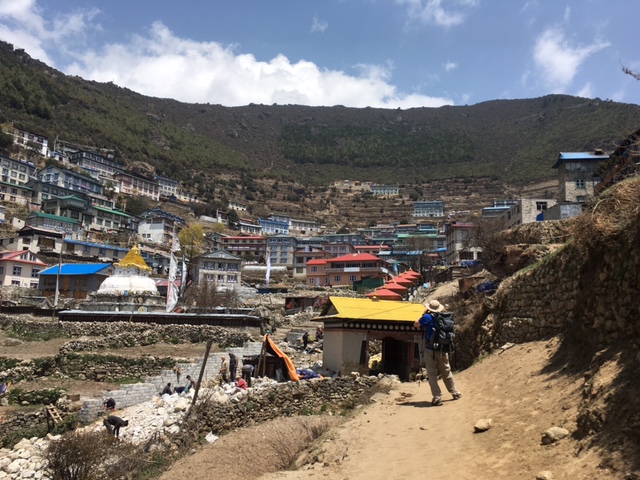 Here is Hugo just entered the lower portion of Namche. You can see the entry gate, the stupa, and our tea house. It is the one just to the right and behind the stupa, just to the left of the white vertical prayer flags. It’s called the Zambala Lodge and they have satellite TV so might be able to watch the start of the Sherpa TV series tonight. Our goal is to get to base camp as relaxedly as we can and the very comfy cozy tea houses we are staying in are assisting us in this mission. We are given a hearty welcome at each tea house reminiscent of the many welcomes I’ve had around Newfoundland and Labrador when I’ve been traveling there. I’ll close this written update for now and call off an audio update in a little bit after I’ve had a little bakery time. Thanks for coming along!