Since March, Marian and I have been exploring and adventuring closer to home. We’ve been pushing ourselves to find and fall in love with new outdoor places rather than stick to all the places we already adore. We skied until May 2 and then turned our attention to paddling, cycling, and hiking. For sources of inspiration of where to go, we pulled out some of our local guidebooks, both new and old. 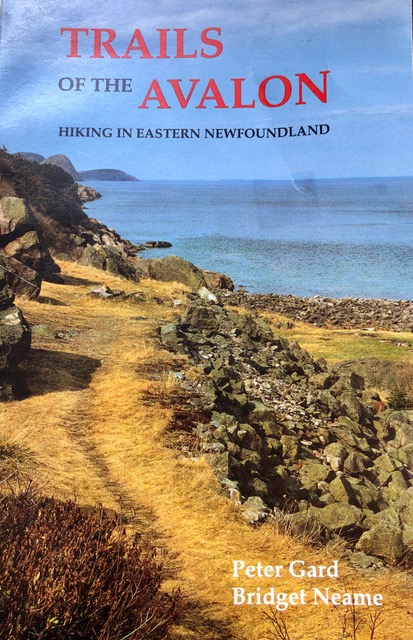 Trails of the Avalon, published in 1989, revealed a few hikes that we had not yet done. In particular, Hike #13 Avondale River caught our attention. For much of the summer we avoided it because we thought it might be crowded with its proximity to a camping facility and the T’railway. As it turns out, we were likely only some of a handful that passed its way this season. Peter Gard and Bridget Neame described the trail as a “delightful riverside walk” that granted access to the pools, gorges, and pebble beaches of the Avondale River. They also mentioned that the trail was developed by a Katimavik Project, though they didn’t say when.

We took the Avalon Access Road off the TCH for 3.6 km and turned left on Old Mill Road (leads to the Old Mill RV Park. We parked immediately on the left and took the ATV track across from where we parked, down to the T’railway.

At the T’railway we turned right and walked approximately 500 metres until another ATV track led us to the Avondale River. 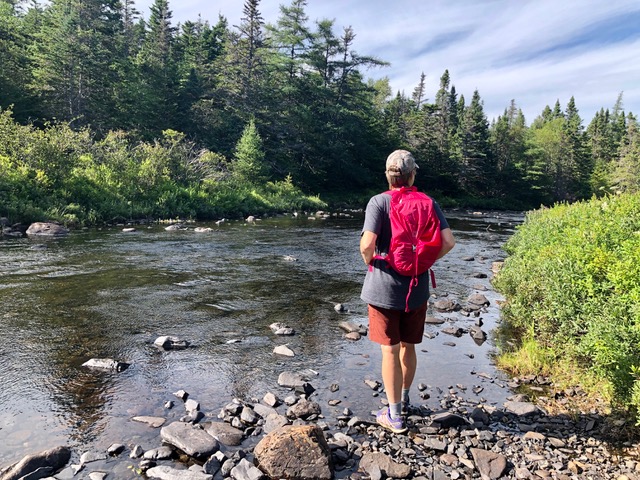 From there, we followed a fainter trail on the right side of the river (having backtracked a bit from the river’s edge). From here on, we had to keep a close eye on the ground in front, looking for evidence of the trail. Mostly, it was pretty easy to pick out because, at points in the past, it was hiked more often and thus a 30 centimetre footpath remains. In places we had to look more closely because successionary shrubs are crowding the footpath and a few moose have contributed their own trails to the mix.

Not too long from where we first joined the river, we found the first of three delightful swimming holes. From there the trail climbed away from the river to the top of the gorge. Look for a faint trail leading up to the top of the bluff. After the very short climb, we were rewarded with several look-outs over the river as the trail meandered along the top. 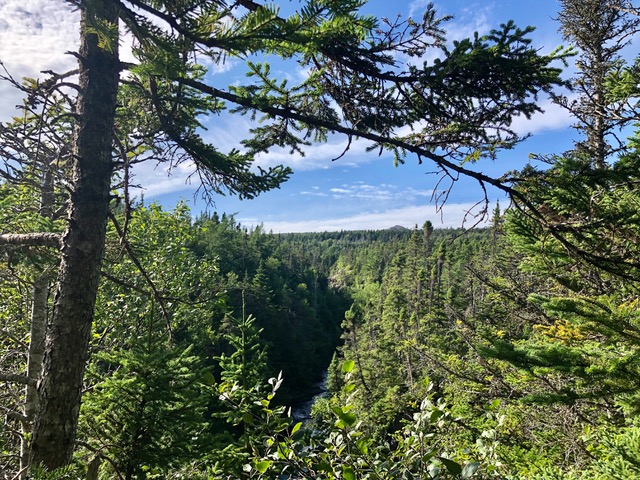 The trail took a big right hand turn and I followed a smaller footpath that lead me down to the river again (and swimming spot-see pic below) through a steep cut. Marian stayed high and found the overgrown turn of the trail to the right. I climbed back up and caught up to Marian. 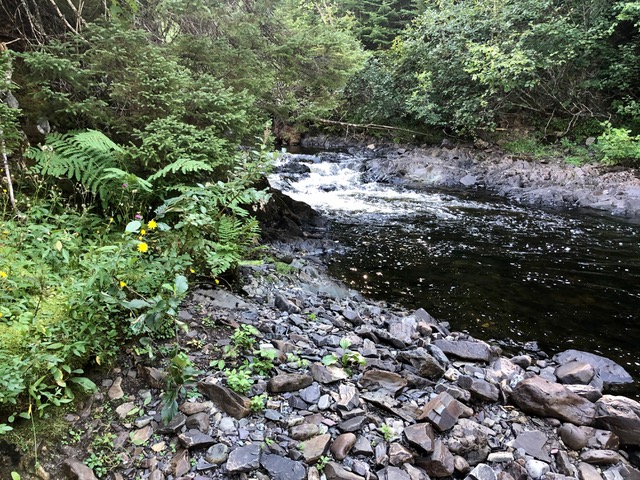 As you can see below, there is evidence of opening for the trail and a footpath below the shrubbery.

After some more hiking through the low shrub, the trail became more distinct and reminded us of an old cart track. Here Marian is celebrating that we were actually out on the Avondale River Trail enjoins a grand adventure.

The track became more and more distinct as we got closer to Avondale and finally became an ATV track once again. We soon passed a pole line and then 400 metres later, we turned left onto a well-defined trail that led us to the fine bridge below.

After a short climb, we descended to the river once more. Here we found this gorgeous waterfall (pun intended) and another fine swimming hole. There was trash scattered about that looked more recent so we suspect that this spot is more frequently visited.

We retraced our steps back and wondered why this sweet little trail had become fallow. It wouldn’t take too much work to reclaim this lovely hiking resource for the town of Avondale. It’s a great hike-you need to be confident setting out on a less developed path. There is no signage, the track is overgrown and muddy in parts with a few bog holes thrown in for fun, and I recommend having a GPS or GPS enabled phone along for assistance navigating the trickier parts. You will be rewarded with lovely views and a trail that you can have all to yourselves. Between walking the T’railway and the forgotten path, I felt like I was walking through some history that I wanted to know more about.

1 Response to Exploring a Forgotten Trail: Hiking the Avondale River